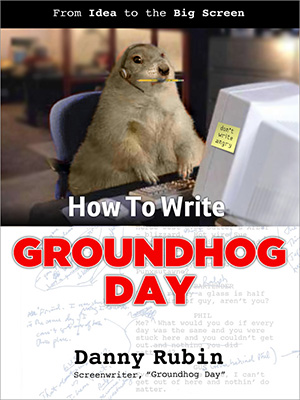 Check it out, tell the world, and whatever you do, don’t write angry.

Many of you know that Groundhog Day is my favorite movie. I have been privileged to share a radio show with the writer, Danny Rubin, who has been nice enough to correspond now and then with me via e-mail. He's written a book, How to Write Groundhog Day. I ordered it for my iphone on the Kindle reader. I suggest you do the same. It is both a how-to book about screenwriting, and a record of how the GHD script was written. As you know, GHD is fast approaching Casablanca, Citizen Kane and Chinatown in the annals of 'best movie script ever." The book is amazing and impressive. I literally found it almost impossible to put down. I read it all in one day, in snatches and long uninterrupted stretches. Rubin's prose style is smooth and his subjects are fascinating. We are lucky he kept such copious notes, giving us real insight into the write/rewrite process involved in coming up with an idea, writing it and polishing it. I thought I had the first draft of the script; turns out I had the first Rubin/Ramis draft. I am not sophisticated enough as a reviewer to explain why some books are easy to read and bring you along, and some are difficult to get into. This is one of the easiest to get into I have ever read. I am not surprised.

Welcome to another perennial item. I run this one every year in conjunction with Groundhog Day. The Bill Murray movie of the same name is the 34th funniest American film of all time, according to the American Film Institute. It is also my favorite movie of all times. This is the ninth time I've run this item!

I went to a showing of Groundhog Day sponsored by the San Francisco Zen Center on Friday, Aug. 10, 2001, held in the Trustees' Auditorium of the Asian Art Museum in Golden Gate Park .

I have so much to say about this exciting, exhilarating, eye-opening experience that it is now a subsite titled Groundhog Day The Movie, Buddhism and Me, which includes a description of that seminal showing, commentary, and links to other sites that deal with the connection. While noticing the connection between this movie and Buddhism is not particularly profound, it was news to me, and the nuances were explored in a particularly exciting fashion during the Zen Center presentation. My site is rapidly gaining ground as the authoritative center for GHD/Buddhism commentary on the web. I brush it up and add new material regularly, so if you haven't been there in a while, take a look.

If you love the work of GHD writer Danny Rubin as much as I do, check out his web site which includes a bio, a list of his works in progress (exciting) and a list of his sold films (also exciting).

I can't wait for his next released film. Go Danny!

In the meantime, note that the University of California has published a Groundhog Day book, by Ryan Gilbey. Also, check out The Magic Of Groundhog Day by Paul Hannam, a self-help book about applying the lessons of Groundhog Day the Movie to your own life.

Robert Malchman found a New York Daily News Where Are They Now feature.  Bob Nilsson checks in: I stumbled upon this clip of Stephen Tobolowsky explaining Bill Murray's pain in stepping into the puddle during Groundhog Day. Looks like there are many clips at YouTube about the movie.

No more need for speculation about how many days Phil/Bill Murray was stuck; based on Danny Rubin's first draft, it was several hundred years! The studio chose to fuzz it up, but who would know better than the man with the original idea? Buy his book and find out the clever way Phil kept track of how many repeats he experienced.