So how did Punxatawney end up on my bucket list? First, some background, according to CBS and the Associated Press:

“February 2nd is Candlemas — a Christian holiday with pre-Christian roots. Candlemas marks Mary's ritual purification, 40 days after the birth of Jesus. In pre-Christian times, it was the festival of Light. The Celts called it "Imbolc" — the midpoint between winter and spring.

The Germans believed if a badger came out of hibernation in foul weather, spring was on its way, and if it were sunny, he'd scurry back to his burrow, because winter wasn't done.

When German colonists arrived, there were no badgers in the East, so they drafted the groundhog to do the prognosticating.

In the 1880s a western Pennsylvania newspaper editor hatched the Groundhog Day idea, sold town fathers on it, and the Punxsutawney Groundhog Club — and the holiday — were born.”

Note that last part, about the newspaper editor. Newspaper editors have tried to find ways to promote their home towns for as long as there have been newspapers. The Chandlers used the Los Angeles Times to create modern Los Angeles.

While their schtick has not created a city of 15 million people, I have to hand it to the Punxsatawney Groundhog Club (actually, I literally have to hand it to them—I’m now a member, more on which anon), they have created one of the world’s truly great tourist schemes. It’s not New Year’s Eve in Times Square, or Mardi Gras in New Orleans, or Carnival in Rio, or even Rose Festival in Portland, Ore. (gotta plug the home town), but it is an amazing feat to attract 40,000 people, at 4 a.m., in the geographic center of nowhere (an equidistant two-hour drive from either Cleveland or Pittsburgh), to stand in a field where the thermometer says 12 degrees Fahrenheit and the wind chill is in negative territory to watch a rodent (or squirrel or marmot or woodchuck) named Punxsatawney Phil pretend to predict the weather. I say pretend because the sky was covered with a thick cloud layer and there is no way Phil saw his shadow and scurried back into his burrow, but that’s what the Inner Circle said, after their president spoke a little Groundhogese with his charge at dawn on Feb. 2. That’s par for the course; in his 132 years in the weather-predicting business (the club claims Phil has lived that long) he has only predicted an early spring about 30 times.

Of course, the idea of Groundhog Day is good, but maybe not that good as a tourist draw. Locals say the annual turnout was a few hundred people each year—admittedly a lot of people freezing their butts off to watch a marmot weather predictor. But for the event to become a real draw, to bring 40,000 people into a borough with about 5,000 residents, it needed something besides the basic squirrel weather service idea.

One way to get into the big leagues would be to garner enormous press coverage. Even when I was a boy, Groundhog Day was ubiquitous on print and broadcast media. That interested me in the event. I mean, the Journal covered it every year; it must be important. That tradition continues; on the morning of Friday, Feb. 2, 2018, by noon there were 68,000 Google citations to news stories about Phil’s prediction, from reporters of all types. I defy you to find a U.S. newspaper, broadcast station or network that didn’t do an item on Phil. But in a century, that massive dose of old-fashioned publicity didn’t really make the celebration catch fire.

Another way to get into the big leagues would be to get Hollywood to make a film. Perhaps one mostly shot several hundred miles away, one in which the ceremony itself plays a minor part, but one which makes the words “Groundhog Day” part of the English language as a synonym for “living the same day over and over.”

Well exactly.  Danny Rubin wrote it, Harold Ramis directed it and Bill Murray starred in it. And the year after Groundhog Day’s release in 1993, even though Punxsatawney, PA is no Woodstock, Ill., the crowds wanting to see the real thing rose from the hundreds to the tens of thousands.

Here is my experience of the 2018 event, complete with advice.

First, do not, repeat, do not show up at dawn on Groundhog Day and expect to be able to see the stage without binoculars. And frankly, if you show up at dawn, you’ll never get to Gobbler’s Knob on time, because it is two miles from town on steep, icy, narrow roads (closed to most vehicular traffic except shuttles) and takes 35 minutes to walk. Which didn’t keep hundreds of people from walking, but as we drove past, they looked miserable. Especially on the way in. There were large floodlights almost everywhere, but not everywhere. Walking in the pitch black on icy roads would scare me.

Ticket prices for the buses to the Knob are $5 per person, 12 years of age and under ride for free. If you walk up, the event is free.

But I suggest you check out groundhogday.org and, at the very least, join the groundog club (I did!) and buy a parking pass for $40 and an Inner Circle Section Pass for $20. The parking pass allows you to park quite near the site. The Inner Circle pass gets you close enough to the stage to smell Phil’s breath (kidding). This will be the best money you have ever spent.

Come prepared for an arctic expedition. Coat, hat, gloves, scarf, (actually, a face mask would be good) all appropriate for sub-zero wind chill. Don’t neglect your boots; there may well be snow on the ground as there was this year. Warm and waterproof are the watchwords. You may not need these clothes (if Groundhog Day had been Jan. 30, it would have been 40 degrees at dawn), but you must be ready.

Accommodations are hard to come by and the “good” ones book up a year in advance. There is not much in town, and not much nearby. Not a surprise for a town of 5,000 in the middle of nowhere. If you don’t want to battle the crowds in Punxsatawney for breakfast, be prepared to drive 30 minutes to the nearest diner. Pittsburgh and Cleveland are each about two hours away, but you’ll need to be ready for a two-hour drive at 3 a.m.; we were ready. By staying two hours away, we got to stay in a pleasant hotel on the eastern edge of Pittsburgh, with nearby restaurants, a gym and a business center.

Note that, if you have a parking place, your GPS will send you to the wrong entrance; be sure to follow the map attached to your parking pass. If you choose to shuttle from downtown, be sure to set Barclay Square as your destination, and read groundhog.org for information on parking.

So, what’s the actual experience like? We had expected to arrive at 5, but the roads were in better shape than we expected, so we got there at 4:45 a.m. We parked and walked the short distance to Gobbler’s Knob. There was an inch or so of snow on the ground, and the sub-freezing temperatures made everything feel slick. My biggest concern was slipping and falling, but despite the apparent hazards, that didn’t happen. Probably because we were standing in a field, not on asphalt or concrete. I imagine a warm rainy year would pose a different set of problems.

My other big concern was standing in one place for 2½ hours with no chance to sit down and not much chance to move. We could have gone back up the hill and bought a hot beverage, but even in the Inner Circle enclosure at the front, if you leave your place you’re not going to get one as good when you get back, unless you are with someone. I was with someone, my daughter Marlow, but was still worried about walking on the icy ground. I was worried, but the entertainment is designed to keep you moving in your place, which helps with both warmth and the lengthy period of standing.

On arrival it was 14 degrees, but it dropped down to 12. That’s something you probably don’t think about very often; as dawn approaches, it generally gets colder all night, with the lowest temperature just before sunrise.

Everything was well lit with large generator-powered lights. The stage was lit for television, of which there was a lot. From the time the site opens at 4 a.m., there is entertainment, hosted by two top-hatted members of the Inner Circle. In energy and demeanor, they reminded me of nothing so much as a young Dan Ackroyd and John Belushi as the Blues Brothers. They were backed with a set of local girls, the Phillettes. In 2018, Sunny Sammy was the standout. All of the dancers were good; she was amazing.

Several bands rotated through, playing until their fingers or instruments froze. Four young women, aged 7 to 17, called themselves “The Queen of the West,” and played violin. I cannot begin to imagine how they either tuned or stayed in tune, considering the weather. There was also a brass band and a group consisting of three guitarists and a string bass called the Beagle Brothers. The two finalists of Punxsatawney’s Got Talent competed for our approval. A big man played a song he’d written about Phil and did excellent crowd work getting us to sing along. In any kind of normal competition, he would likely have won the $500 first prize. Alas, the other act was a belly dancer. Let me make this clear—she was dancing barefoot, in a standard Belly Dance costume (no body stocking), in 12-degree weather with a wind chill below zero, at 5:30 in the morning. I am not an expert on belly dancing, but she was certainly competent. And she blew the singer/guitarist away when it came to crowd acclaim.

The live music was interspersed with lively recorded music. At 6:30 a.m., the lights were turned off for a 20-minute firework display. Who doesn’t love fireworks? And they were being launched from just a few hundred yards away, on a pitch-black, cloudy night. So, they were bright and noisy. 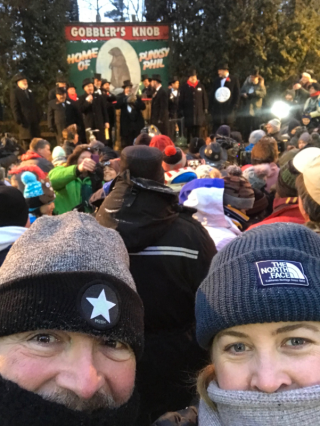 Finally, just before sunrise, the Inner Circle, a group of largely older men in top hats, tuxedos and black overcoats (except for one relatively young member, who apparently didn’t get the memo), walks to the stage, and the prognostication ritual begins. The movie gets this part almost exactly right. The president taps on the door marked “Phil,” with a special cane. Phil is removed. The president talks to him in “Groundhogese,” then reads a scroll (more words but less ornate than the one in the movie) which reveals Phil’s prognostication. Shortly after, the crowd makes a break for their shuttle bus, their nice warm car, or another half hour of bracing cold as they walk back to town. In a nod to the movie, the PA firsts blasts “Pennsylvania Polka,” and then Sonny and Cher’s “I’ve Got You Babe,” which show up more often in the movie than Phil.

So that’s it. There are hundreds of people who come every year. There were people at the Knob from all over the world. I though that coming from San Francisco would distinguish us, but there was one person from Japan and one from Pakistan, so we didn’t have the longest trip by any means.

I love the movie, and I enjoyed the ceremony as much as it is possible to enjoy an event where you spend several hours in the freezing cold to watch a woodchuck predict the coming of spring. For me, once is enough. I’ll just watch the movie every year on Groundhog Day. I’ll be warmer and more emotionally involved.