In my experience, most people face a constantly recurring question professionally: do I want to be a big fish in a small pond or a small fish in a big pond? For me the answer has always been easy: I’d rather hit .330 in AAA than .165 in The Show. I think this is the route to happiness.

If you’re a regular reader, you know I left the small pond of Portland, which I defined a while ago as the ultimate minor-league town.

Which is to say, I preferred being a big fish in the CMP Media pond (covering computers) than being a small fish in the New York Times or Washington Post pond, coverning the Cop Shop or the city council. I’d rather be the best journalist at a trade media company no normal people have heard of than the 50th best reporter at The Times.

This is a public service announcement, brought to you by this blog and the Ad Council.

But seriously, it took me a half hour to find this code. If your Google search brought you here, this is the syntax. Your YouTube video code  is DuMMyCodE, and you want to enter at 45 seconds and end 3:44. Convert all times to seconds and use this code:

Substitute the URL for you video where it says “Dummy Code.” Be sure to strip off any miscellaneous stuff after the last letter of your code (? = & edit, watch, etc.)

Good luck, but I’m willing to wager a) it will work and b) I just saved you a half hour. Feel free to email the half hour to typepad@schindler,org; I could use the time.

You’ve Got To Be Taught

This Rogers and Hammerstein song from South Pacific (1949) is as true today as the day it was written, which is why several southern states once banned it for being “Communist.”

Meme: If Apple Were A Democracy

I fell on the floor laughing when I saw this. Consider looking at the Joytech website from whence it came. 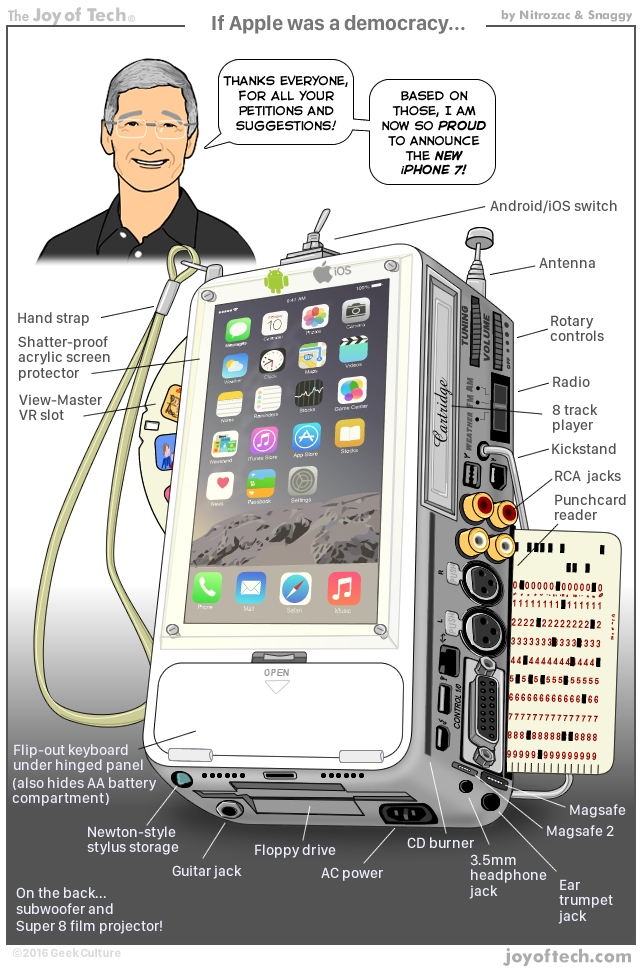 Humor: The Difference Between Brits and Americans

From Leah Garchik's Personals column in the San Francisco Chronicle of April 11, 2000.

Q: What is the difference between the English and American peoples?

A: Number one: We speak English and you don't. Number two: When we hold a world championship for a particular sport, we invite teams from other countries. Number three: When you meet the head of state in England, you only have to go down on one knee.''

Larry King noted: “John Cleese touched on only a few of the differences between the U.S. and U.K. He omitted, for example: In the U.S., political sex scandals usually involve women.”

I forwarded that to Leah Garchik, who riposted:
”Very funny. I'll bet there's a BIG list of those differences.”

Complete Bushisms
The Complete Bushisms was a proof that W graduated from Yale and Harvard with gentleman’s C’s. No wonder he never released his transcripts. Jacob Weisberg, chairman and editor-in-chief of The Slate Group in 2009, collected them.
…
Programming Languages
Jokes about what programming language you use.
…
Procrastination Graphic (DRAFT)
Linked-In led me to this great procrastination graphic