What to write about one’s family is an issue that all personal columnists face.

I was probably too laissez faire back in the 80s and 90s when I wrote about my daughters. I guess I was lucky they didn’t know that at least one personal columnist paid their kids $5 each time their name appeared in the column.

Thinking about this recently, I realize that most of you don’t know I now have two grandchildren, a toddler boy and an infant girl. I cut a deal with their mom: cute stories: OK. Pictures or names: NOT OK.

First a cute story about the girl: I have discovered that when she fusses, I can often calm her down by doing the “royal wave.” I am an anglophile and I read years ago that the royals model their public wave after “screwing in a light bulb.”

At almost four years old, my grandson is already correcting me. He calls me Abba, and seems sorry to have to say, “O Abba, that’s not right.”

As usual, I expect new material for my Groundhog Day The Movie website from my avid readers. Fire away if you have something you don't see here. It’s getting harder to find things I missed: the site has been up since 2001.

I run this item every year in conjunction with Groundhog Day (Thursday, Feb. 2 this year). The Bill Murray movie of the same name is the 34th funniest American film of all time, according to the American Film Institute. It is also my favorite movie of all times. This is the thirteenth time I've run this item!

There Are No Little Things 9: Newspaper Loses TV Station

The FCC took WHDH away from the Boston Herald-Traveler. The loss of the station killed the newspaper. I could not have imagined a decision less meaningful to me, yet it started a chain reaction which undid one engagement and launched another. One result: WBZ got the Red Sox, which caused them to hire staff, including me. Working there helped torpedo my first engagement. Charlie Ball took up teaching journalism at Simmons College after losing his Herald job; one of his students would eventually meet me through her newspaper, then end up as the second woman to whom I was engaged.

Although his life has since turned out horrifying, Prof. John Donovan was a brilliant teacher and lecturer in the early 70s. He taught 6.251, Introduction to Computing, which is an electrical engineering course number, even though he was an associate professor in Course XV (management). He was clever and witty, made programming simple, and collected cards from all his students with their “permanent” address, promising to get back in touch with us someday. He never did―at least not with me.

Things I Never Mentioned
I love Gary Larson and have every The Far Side  strip in a lovely two-volume collection. I loved That 70s Show and cannot wait for the Netflix revival, That 90s Show, which at the very least features Red and Kitty. Others will do cameos.
…
The Accordion Segment
Because I was a TV tech, I know how local TV news ends on time. The weather segment was the “accordion,” because it could get longer or shorter to make the timing right. Which is why some nights the report was “rain tomorrow” and other times it included every high within 100 miles.
…

Quote about Lies
We ain’t seen nothing yet: Last years lies were “only the tip of an iceberg of mendacity, bobbing insidiously in a sea of deceit.”

Dinosaur Humor
Sent to me by a friend of long-standing. 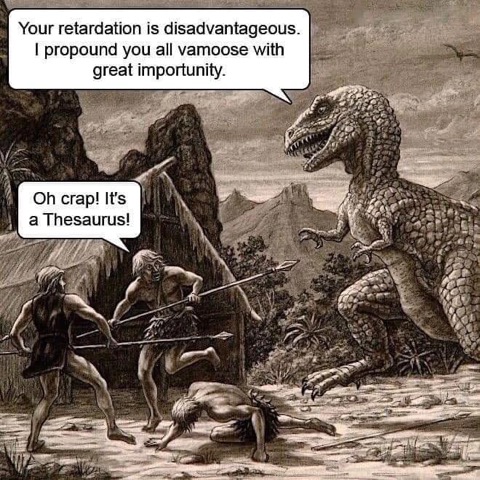 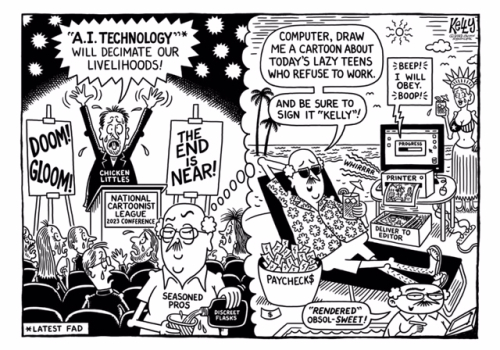