(A reprint of my annual anniversary item, with small adjustments).

As of Oct. 16, it's been 24 years since my online revival of this 52-year-old column. (As published, as a Typepad Entry) Twenty four years online! (with a small six-year gap in the middle). I’ve written 848 columns, successors to an idea born in MIT’s objectivist student newspaper, ERGO, on September 23, 1970, six days after my 18th birthday. (See entire first column here) 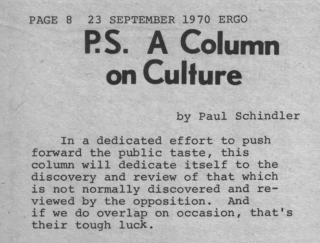 When I started this column online, "W" was still the second-rate governor of Texas, Sara Palin was busy running Wasila, and John McCain was angry. W is still second rate, Palin isn't running anything, and John McCain is gone.

I was still working for CMP (computer journalism company), and had a weekly podcast, back before Ipods (which definitely cut into our audience). My heart beat by itself and I weighed 270 pounds. In short, things were different.

In 1998, during the Clinton impeachment, I either had to start a column or check into a mental institution. PSACOT gave me a forum in which to express, to an audience (no matter how small) my feelings about that political circus. [As a one-time U.S. history teacher, I am forced to note that Andrew Johnson's impeachment was a rabid partisan witch hunt, as was Clinton's. Only Nixon's near-impeachment was bipartisan--and only Nixon resigned. And only Trump was charged twice for crimes he actually committed.]

The column/blog has since evolved into a combination of diary for my family and me and bulletin board for my clever friends--in short, a personal column. Like, but not as good as, former San Francisco Chronicle columnists Adair Lara or Jon Carroll. Or Doug Baker of the Oregon Journal.  Or, to take a national example, former New York Times columnist Anna Quindlen, considered the mother of the personal column concept (even though Stanton Delaplane and Charles McCabe of the San Francisco Chronicle actually beat her to it--but of course, if it hasn't happened in New York, it hasn't happened).

PSACOT is also a revival of sorts. My MIT readers would remember the original P.S. A Column On Things, which ran in ERGO, MIT's objectivist newspaper from September 1970 to March 1971, and The Tech, MIT's semi-official student newspaper, six times from March 1971 to May 1971. Those were among my happiest days as a journalist. If I had truly understood the fulfillment a personal column gave me, perhaps I would have fought harder to keep it when Bob Fourer killed it, or I would have revived it when I became editor-in-chief two years later, or tried to practice the craft as an adult (and become the father of the personal column).

In any case, I expect to still be doing this next October; I'll meet you here.

From my UPI chat group, this heartwarmer from Ron Cohen:

Daughter Zen got her initial COVID vaccination today in Israel. She is considered a critical health care worker.

A certified chaplain, she works a day or two a week at the hospital in Tzfat. She tours the whole hospital and sings to patients, accompanying herself with a variety of stringed instruments — guitar, ukulele, etc. Her visits are eagerly awaited by the patients — the highlight of the week for many.

Her specialty is singing to tiny newborns in the preemie ward. Even though they are separated by glass windows, the many monitors hooked onto their tiny bodies confirm they are involuntary responding. (Her singing improves their vital signs)

She always has intended her music to be palliative and comforting. As so many of my friends are well aware, I am very, very proud of her.

I did a brief on this last week, and on sober reconsideration, decided it was worth more than that. Steve Kirsch was sports editor of The Tech, and despite that has gone on to quite a career as an entrepreneur and philanthropist, with his own panel of expert scientific advisors. Best of all, he’s a guy who doesn’t get up in the morning without checking the best available science. You can look him up. He was interviewed on KCBS-AM (find it here, search for Covid Research). The whole interview is a good read; I recommend it. But as a content creator, I don’t like to reprint whole articles unless they seem in imminent danger of disappearing.

As the world awaits a corona virusvaccine in anticipation of returning to a "normal life," scientists are still seeking funding to find the most effective ways to treat the virus with existing drugs.

Steve Kirsch is the founder of COVID-19 Early Treatment Fund (CETF) [CLICK AND DONATE] and wanted to look at what's being done, and not being done, by talking to researchers he's helped fund over the years to try and find a way to treat the virus early as someone who faces multiple risk factors himself.

From my daughter Rae:

Kevin and I are matching donations to any organization working for racial justice up to $10k. So far we’re over $4,000 in donations. If you’d like to donate or already have, just send a screenshot showing the amount and the organization and we’ll match it!

Send your receipts to typepad@schindler.org

The activism of the past few weeks is only the start. We have to keep going and follow through in creating a more just society.

If you don’t know where to start, here’s two groups to consider:

The Equal Justice Initiative, https:/eji.org/, is committed to ending mass incarceration and excessive punishment in the United States, to challenging racial and economic injustice, and to protecting basic human rights for the most vulnerable people in American society.

The NAACP Legal Defense and Educational Fund, https://www.naacpldf.org/, seeks structural changes to expand democracy, eliminate disparities, and achieve racial justice in a society that fulfills the promise of equality for all Americans.

One Eccentric Way To Give