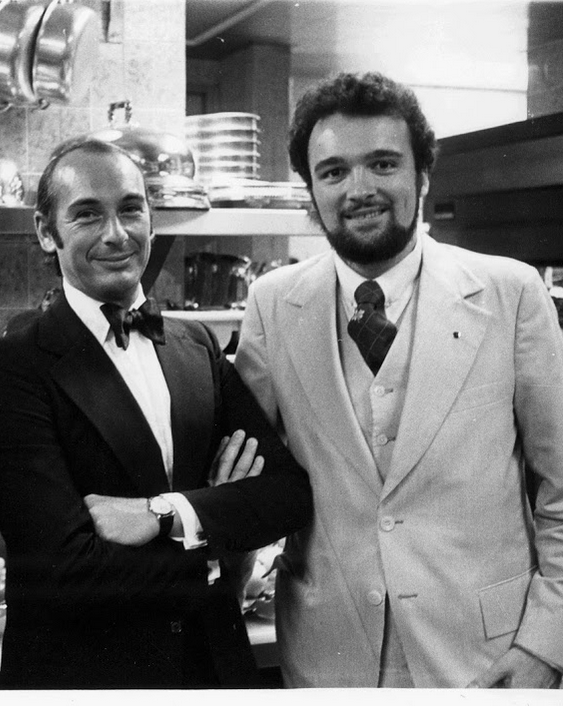 Paul in the Palace Restaurant kitchen with Claude Baills

Jim [Healion, Hartford Bureau Manager]--I think this could go as a New England horizoner--or maybe world. If not as a first personer, then as a third personer. What do you think?

What does the Chef Claude Baills [he kept at it; in 2000, he owned the Chef's Table in Franklin Lakes, N.J.] do to meat, vegetables and pastry to make the fixed-price five-course meal worth $50 a person and five hours to eat? And who would pay it?

Most weekend nights, a capacity crowd of 50 people pay the price, and owner Frank Valenza [still in the restaurant business in 2001; at the Upper West Side’s Restaurant Two Two Two ] said it is not so much what the chef does to the salmon, veal and beef that raises the price of the meal, it is the labor cost of having 20 people on hand to serve it.

Not to mention the freshly polished silver, sometimes replaced twice during a course, four crystal glasses and more than a dozen plates it takes to serve a meal.

A wide variety of people eat at The Palace on a given night. On one recent Saturday, a pair of 24-year-old reporters from Connecticut dined near a group of men from New Haven in their late 20s, who came by limousine, and a New York couple celebrating their 22nd anniversary.

There is no need to attract passersby, nor is there much foot traffic by the door on 58th street, in the shadow of New York's 59th Street Bridge. The front door is locked; patrons have to buzz to be admitted.

Inside, ties are required and no woman on a recent Saturday wore anything less formal than a long dress. The dining room is decorated in French provincial style and each table is graced with a candle and a bowl of tea roses with baby's breath.

The only English on the all-French menu is the subtle note near the very bottom, "Prix Fixe: Fifty Dollars," which informs the diner, who probably already knew, that no matter what the order, the price is $50.

The 23% service charge is noted immediately below the price, which when combined with the New York City sales tax means a minimum of $133 for two, not counting cocktails or wine.

The wine list runs on for pages, starting with the rare foreign wines that cost as much as $400 a bottle to the humble California white at $25, which goes rather well with veal.

It is not a meal to be eaten on a night when you have other plans. This reporter and his companion sat down at 8 p.m. and finished the meal at 1:30 a.m. During long pauses between courses, we either talked or looked at the culinary delights being served at the next table.

French cooking and restaurant eating at the level of The Palace is not only a process involving subtle sauces and precision cooking, it is a process of placement on the plate and pleasing color. It is food to be both looked at and eaten.

The menu need not be intimidating; our waiter was not haughty and arrogant as some are in restaurants in this price range. He translated the entire menu and made recommendations, as well as describing the contents of each dish. The menu includes seven main courses available any night and another 14 dishes that have to be ordered one or two days in advance.

Cold appetizer, soup, hot appetizer, main course, salad and dessert comprise the meal, with a brief pause for homemade lemon sherbet with black currant sauce "to cleanse the palate" between the hot appetizer and the main course.

I wasn't sure I needed any help to taste the subtlety of the tarragon sauce spooned over the perfectly cooked veal which was heated up on the silver grill next to our table just before it was served. By that point in the meal, it wasn't even a surprise when a new plate and new silverware were provided for a second serving.

Maryland crab and caviar began our meals, followed by a double chicken consommé with dumplings that gave the word consommé a whole new meaning and a mussel soup with saffron that brought tears to our eyes.

Salmon sliced so thin you could see through it graced her side of the table during the hot appetizer course, while I had a cheese soufflé that was also a quiche. More simply, it was cheese so light it melted in your mouth, served in a light pastry crust.

The salad was unusual but interesting, and as everything else in the meal was light to eat and a delight to look at. There were tree kinds of cheese plus crackers next. [I don't think this was the actual end, but you get the idea by now].