You can listen to the four episodes of the Eugene Oregon Show by clicking these links:

It might be more convenient to download them as a podcast. Paste this link into your podcast app under add a new podcast by URL

How It Came About

During my freshman year of 1970-1971, I wrote a number of radio sketches for my friend and fellow resident at MIT Student House, Michael Wildermuth, also known as Captain Zomarr. In the summer of 1971 I wrote four sketch shows for a WTBS series we had agreed to call The Twilight Dome. When I arrived in the fall of 1971, Mike was too busy to perform them. So, I decided to perform them myself.

My recollection of taping day

We’ll start with the show, the last major thing I did for WTBS in terms of original production.

Harry Klein, Alan Baumgardner and Jeff Rubin, the only other people at the station who had ever written comedy besides myself, agreed with me we could do the shows. We would tape them in a lecture hall, 9-150, before a live audience which would be attracted by ads in The Tech, which I could get cut rate.

Michael Fiertag, in February, 1972, wrote a much better description of that taping than I ever could. Anyway, we had technical problems. Alan was only prepared with the theme, not the incidental music, and the three of them, famed as script doctors, did not spend enough time punching up my weak jokes.

The funniest line, in my opinion:

Anncr (Harry Klein): Hubba Hubba Gene, that’s some suit. What is it, seersucker?

We had a lot more trouble getting through it, and it seemed much funnier to us that it did to either the audience of 10 (in a hall that seated 450) or the audience at home (minimal I am sure).

They way I got the name was funny. Two weeks before airtime, and we had no name for the show. So Harry locked himself in the technical department closet and shouted names for effect. “The Gene Paul Show.” No, Didn’t have the right ring Neither did “The Paul Schindler Show” or the “Paul St. John Show.” Suddenly, he said, “What’s your middle name again, Eugene? And you’re from Oregon. And there’s a city named Eugene, Oregon,” and he shouted, “The New Eugene Oregon Show,” and a star was born.

Anyway, those four shows, taped in a single afternoon, meant a lot to me, even if they meant very little to anyone else. Naturally, I was sure later they could have been done better, like funnier, with a larger audience, with Sherry actually holding the applause and laugh signs when she should have. The whole audience, by the way, was The Tech friends and WTBS friends. Which was good, because we got started late and would have driven an audience out with the lack of humor.

Harry, Alan and Jeff had brought along a Boston Cream Pie which they intended to throw in my face during the taping of the fourth show. I was wearing an ill-fitting white suit that Sherry had made for me for Christmas (making men’s suits is not something best left to amateurs, which is too bad because I always wanted a white suit). But whether it was that or the indignity that got to her, I will never know. But she sat on the pie while I stood there, blindfolded on the radio, sort of expecting what was coming. I was surprised when they took the blindfold off and nothing happened.

“That wasn’t very funny,” I said to myself. “The three of them must be slipping.” After the taping, I found out what Sherry had done and got a little aggravated. We cut all that tape out of the show because it was so boring. I wish now I had saved it. They gave her the pie for a souvenir. We saved it for months in the freezer, but the box was broken so it went bad and we never ate it as we had planned to.

[See Original Text at the bottom of this page]

In which we "cover" a WTBS live taping...

We've been amused of late to see unsigned pieces appearing in Tech Talk written in the narrative style and utilizing the editorial "we" of the New Yorker. These efforts -we understand to be the work of Peter Spackman, a technical writer whose usual literary output consists of the excellently composed, really magnificently printed Reports on Research which the Institute sends to the MIT Associates and to participants in the Industrial Liaison Program. The New Yorker -imitations are meeting with much enthusiasm among MIT's hired writers we're told, and even Director of News Services Robert Byers is thinking of trying his hand at one – anonymously, of course.

Looking at the latest New Yorker imitation in last week's Tech Talk, it seemed to us that it would be so much fun to write that way, and so easy, too, that we started looking around for some event to "cover," as journalists say. At first, we thought of running into Spackman in an aesthetically pleasing way, and asking him a few questions, but while we were pacing up and down Massachusetts Ave. last Saturday, debating with ourselves, the feasibility of such a thing, we noticed that the door to Building Nine, which would normally be locked over the weekend, was propped open by a brown naugahyde half of what might be a container for a reel of recording tape.

Picking up the doorstop, we discovered the letters "WTBS" stenciled in white paint on its side, and we decided to investigate within. Our search for a New Yorker imitation was rewarded in room 9-150, a moderately large, well-appointed lecture hall with plush blue seats in sharply rising rows. On the stage area, a number of young men were setting up two boom microphones, while another played fitfully upon an electric organ.

At a table off to the side, an audio engineer was earnestly experimenting with what we guessed were volume levels. We introduced ourselves to a stout, hirsute young man wearing a black shirt, black socks and shoes, and a white acetate tie and white suit with bell-bottomed trousers, who was to be the real star of the show, "Eugene Oregon," although his real name was Paul Schindler.

We began by asking him, while the engineer in the corner of the stage cried "You're back-feeding!" to one person or another, what "live taping" meant. "Live taping," Paul said, "means that whatever happens, the tape will roll." Paul supplied us with the names of the other participants in the taping. Alan Baumgardner would be organist and would supply a number of falsetto voices as need arose. Harry Klein, who was pacing behind a podium, would be the announcer. The engineer's name was Jeff Rubin. At the other side of the stage from the engineer's table sat a young woman in jeans and -a sweat shirt with "MIT Stud House" lettered upon it in white: Paul's fiancée, Sherry Grobstein. She held a number of signs upon which appeared the words, "Laugh," Clap," "Clap a Lot," or "Hiss," one of which she would hold up on occasion during the upcoming taping.

It was by now 2:30. Some five or six persons had appeared, and would comprise the audience. While Harry practiced openings ("Hello, hello friends, and welcome to the Eugene Oregon Show - hey, that's not bad!"), Paul briefed the audience. "Clapping for radio is a fine art," Paul said. "There's a way to clap that makes it sound as if there are twice as many people in the audience. You just clap twice as fast." He suggested that the audience practice clapping, and Sherri held up the sign that said "Clap a Lot."

Then Paul said that the audience should practice laughing. "For small jokes we want a small laugh. Every third joke is a big joke."

"Are you ready?" Paul asked Alan at the organ, who rolled a glissando off to his right and said that he was. Suddenly two more persons appeared in the room., swelling the audience's size to ten. "Ten! Alan! What'd I tell you," Harry said. Paul completed his instructions to the audience: "He'll say, 'The New Eugene Oregon Show!' You'll keep clapping until I calm you down." Alan was experimenting with the organ. A chord swelled from an AR-4x monitor speaker, and Alan announced: "That's gonna be as loud as the organ's gonna get."

'"A little lower," said Jeff from the engineering console. Harry, at his announcer's podium, put on a blue, double-breasted pin stripe jacket, and suggested a rehearsal of at least the show's opening. The others agreed, so Harry began. His opening was drowned out by the enthusiasm of the audience upon the mention of the name of the show, and Harry remained inaudible to us (although Jeff could probably manipulate his levels so that the tape would be alright) until he came to the introduction of Eugene Oregon himself. Paul allowed the applause to continue briefly, an embarrassed smile playing across his face, until, glancing at his fiancée, he noticed that she had held the "Laugh" sign aloft. The rehearsal ended. Harry promised to speak louder. From the engineering console, Jeff announced that all was ready. The signal from "Radio City" would travel over “program lines” to the WTBS studio, where, for protection, the sounds would. be placed on tape on both of the studio's venerable Ampex tape recorders, Alpha and Beta. For a moment, everyone was quiet. Then Harry cried: "The Eugene Oregon Show - take one." "They're small," mumbled Paul, and the live taping began. 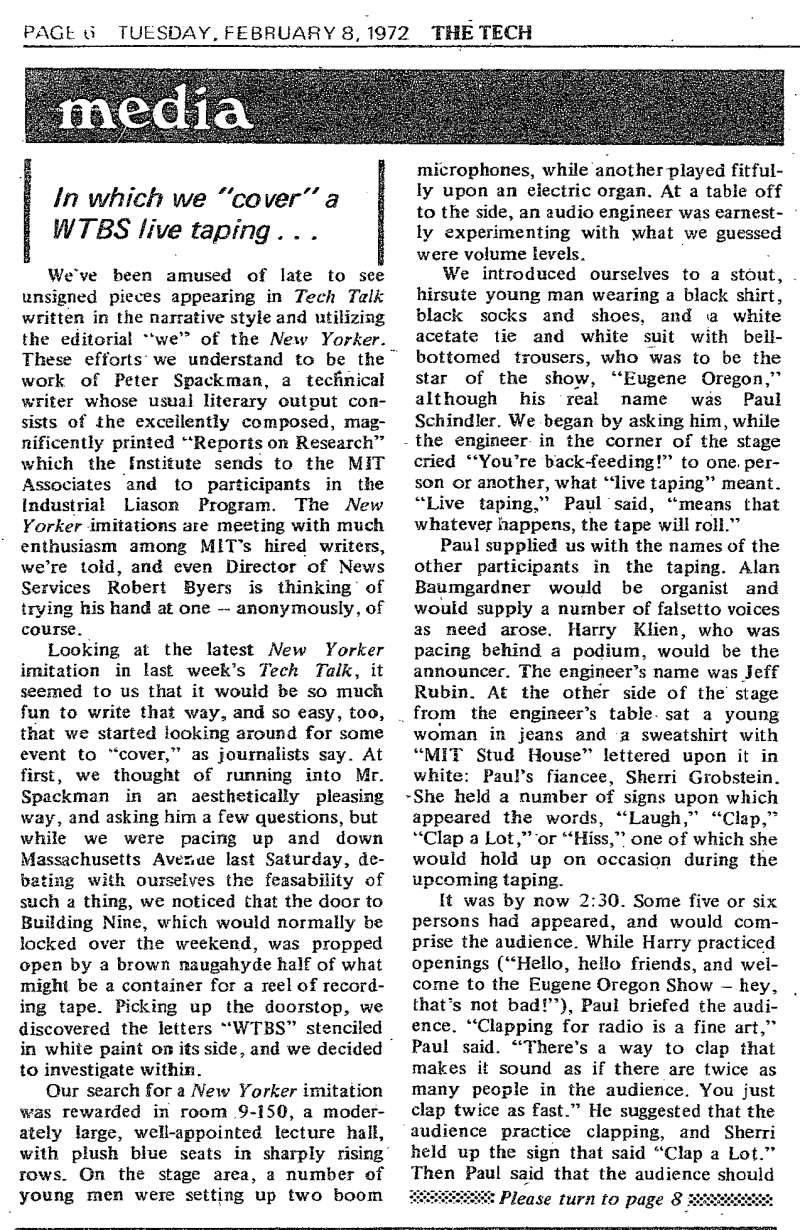