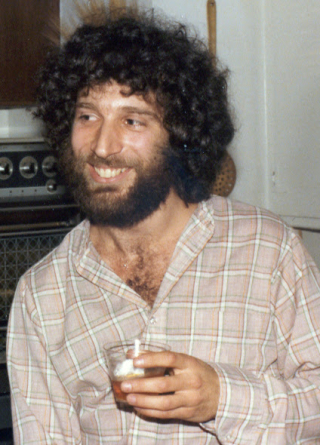 Richard Parker in January 1980 at my wedding.

[This is Columbia’s Description of the Richard C. Parker Memorial Lecture. If you have his CV, or a good obit, please send me a copy.]

This lecture is part of an annual tribute to Richard Parker, a former Assistant Professor in the Department of Microbiology & Immunology.

Richard arrived at Columbia University in 1983 after undergraduate training at MIT, did his doctoral work at California Institute of Technology, and postdoctoral work at the University of California, San Francisco. He established a laboratory, began independent research on transformation of cells, joined in teaching of the department courses, and started training several doctoral students. All this he began despite having been diagnosed, several years earlier, of having lymphoblastic T-cell lymphoma. Richard spent nearly three years in our department, and he was a brilliant, dedicated, dependable and outspoken colleague. Richard fought his disease for six- and one-half years, which unfortunately took his life on July 4, 1986.

Richard was especially dedicated to graduate education, and before he died he asked his department chairman, Dr. Lucy Shapiro, to do everything possible to support graduate training at Columbia. As a result, the department established the Richard C. Parker Memorial Fund for graduate training. This fund is used to sponsor, each year, a seminar by an outstanding scientist. The speaker is selected and hosted by the graduate students of the department, and spends the day talking with the students.

In addition, the Richard C. Parker Graduate Student Award was established, which is presented each year to a student who has accomplished outstanding and innovative work.

Here is an excellent layperson's description of Richard's work.

What I know of Richard

I know he deserves more of a memorial than the lecture and a few scientific papers. When you search for his name on Google, you should find out that he was a warm, caring, loving human being and a brilliant scientist, snatched away from us way too soon at age 36. I know a number of scientists in the field who believe he would likely have been under serious consideration for a Nobel prize, had he lived.

Richard Carl Parker arrived at MIT in the fall of 1970, and graduated in 1974 with a bachelor’s degree in Course VII―Biology/Life Science. He worked in the lab of Dr. David Baltimore, a Nobel winner whose work Richard explained to me, and through me, to millions of readers of UPI stories on the day of Baltimore’s award.

Richard lived at the Chi Phi fraternity in Boston’s Back Bay while at MIT. He was in MIT’s Experimental Study Group and the Undergraduate Research Opportunities Program.

We met in Edwin Diamond’s class, and became fast friends. He worked for and with me at the student newspaper, The Tech, albeit not very often; he was too busy with class.

He attended my very small wedding on Jan. 1, 1980. We played squash together regularly while he was at UCSF, because they had a rare (on the West Coast) squash court.

I don’t know a lot about his childhood. His parents were the late Lenore (Duboff) Parker and Dr. Paul David Parker. His sister is Judith Parker of Los Angeles.

As a child in Brookline, Mass., he played chess at a competitive level. 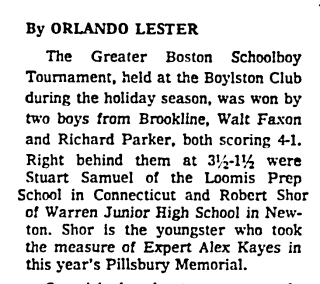