Did I win the genetic lottery, or the sperm/egg dance? I am not sure which, but I am eternally grateful for what I got and didn’t get at the instant of my conception. I got wit, intelligence and charm―mostly from my mother’s Irish side, and from the Celts who almost certainly bred with the Schindlers of St. Galen. I did NOT get alcoholism and depression―mostly from my dad’s Swiss side. I did get the dicky ticker that sent my mom’s dad to his grave at 54, but lucked out from having been born a half-century later, so that I can be protected by my pacemaker/defibrillator. I apparently dodged my maternal grandmother’s glaucoma; “You’re almost 70. If you don’t have it by now, you’re not likely to develop it,” my optometrist said this week.

Talk about being born on third base! And I, for one, never mistook that for hitting a triple.

I decided to check out some more heart/mind information on the Internet. When we speak of having a “heart to heart” talk, apparently it isn’t just a metaphor. Our hearts communicate, via a strong electromagnetic field.

When you are near your mate, your hearts synchronize, an effect that increases as you grow older. When older couples are close together.

When you place a happy person close enough to a sad person, the electromagnetic field of their heart cheers the other person up. Heart-Mind Synchronicity For Manifestation.

All my life, people have been telling me I light up a room when I enter it. Now I know the mechanism; the electromagnetic field of my heart.

Turns out my daughter Rae has paid much more attention to personality tests than me. Last week's item, Myers-Briggs and Me was not about the most well-tested personality test; the Ocean Test (covered a year ago) has much more longitudinal data.

Of course, everyone―by which I mean employers and job counselors and matchmakers―would like it if a simple written test allowed us all to be sorted into bins that reliably predicted the best route for our personal and professional lives. Until that day arrives, the Myers-Briggs Type Indicator (MBTI) assessment (based on the work of Jung) is a first-order approximation of that desired tool.

My first exposure to it was unwitting. In April 1979 I moved to California for a job with CMP Publications, which I expected would last six months, tops (it lasted 20 years). David Dietz, business editor of the San Francisco Examiner  told me I’d be his next hire. In June, he had the courtesy to call and tell me management had insisted on a woman instead.

In the meantime, I had met the business editor of the San Jose Mercury-News, Jim Mitchell―who chided me for years over the time I took a call from him in my hot tub. Like all applicants at that time, the paper had me take the MBTI, after which Jim offered me a job, which I declined as my now-wife had accepted my marriage proposal and declined a move 50 miles south.

I don’t know what my profile was then, but this year, it’s ESFJ (of whom, according to Reddit, 25% are gay). Those of you who know me will not be surprised that my strongest vector is extroversion (very likely), with a likely S, a somewhat likely F, and a likely J. MBTI research says the best match for journalists is ENFJ, so close.

Fast forward to 1991, when, at a staff meeting of Windows Magazine, we all took the professional, paid-for version of the MBTI (there are lots of less-rigorous free versions on the Internet). The biggest surprise: more than half our staff were introverts. Admittedly, most were more technology people than writers, but still…

The most useful thing I learned was that the way I was managing my direct report, Tom Lasusa, could be improved based on his profile and mine. I adjusted my management style based on this advice.

The MBTI also offers marital advice, via a large table that matches up spousal profiles which puts my wife and I in “uh-oh” territory. The much-less-well-researched alternative sorting mechanism, astrology, helped me meet her: she was looking for a Virgo when we met.

So, our rock-solid 44-year-long relationship seems to indicate that science isn’t everything when it comes to matters of love. 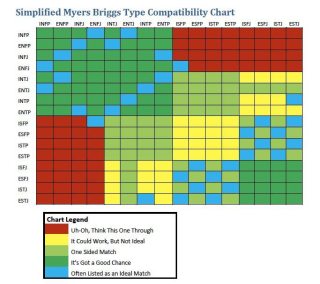 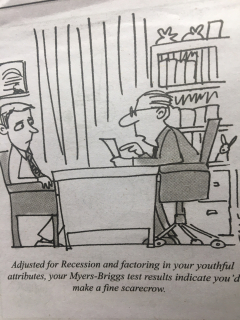 I always thought of this process as closing doors, but I found this graphic (from Anamika Nathani) that perfectly illustrates my feelings about our life choices: 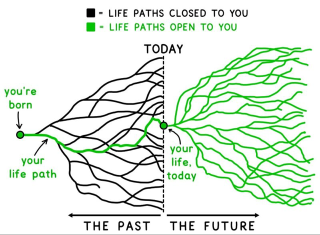 How wide a spousal pool?

On a BBC quiz show, I heard that the median distance between spousal birthplaces rose sharply after the invention of the bicycle. I had previously heard the same was true of the automobile in the U.S. But my best Internet search efforts yielded no proof.

The most scientific study I could find was of spousal birth distance in the Netherlands. “The increase in the distance between the birthplaces of brides and grooms in nineteenth century Holland increased significantly at a rate of approximately 300 meters per decade, from about 4 kilometers in 1829 to 7 kilometers in 1922. Thus over time brides and grooms came more often from different municipalities, and the distance between the municipalities increased.”

I would think the Internet would increase the acceptable physical distances in the dating pool, but research indicates that proximity is a major factor in online dating sites. I know my daughter only met her spouse when he widened his area of interest.

Of course Internet Dating is about the person’s current location. And yet, while I couldn’t find the answer to my actual question, I did discover that the typical adult lives only 18 miles from his or her mother (true of both my daughters, but not true of my wife and I when our parents were alive).

Here's more detail from the Internet:

Interesting news on the subject just arrived from the Friends of Positive Psychology Listserv (to request membership in the listserv, send an e-mail to Jer Clifton: cliftonj@ sas.upenn.edu).

In short, it’s not always you and your chemistry that makes depression. We need to build an anti-depressant society.

Well, think of it like maybe a mug shot of a criminal. If you have two different photographs, one from the front, one from the side, you have a better chance of recognizing that person out in public than if you only had one snapshot.

What Your Genes Predict

I always thought it was simple: your genes set your limits, your environment determined if you reached them. If you had 6-foot genes and shit nutrition, you turned out to be 5-5. If you had 5-5 genes, it didn’t matter what you ate, you weren’t ever going to be taller than 5-5.

Turns out that, like everything in life, it is more complicated than that. Here’s a New Yorker profile (behind the pay wall) that ran on Sept. 13, 2021:

Can Progressives Be Convinced That Genetics Matters?

The behavior geneticist Kathryn Paige Harden is waging a two-front campaign: on her left are those who assume that genes are irrelevant, on her right those who insist that they’re everything.

For me, the nut graf was half-way into the story. A GWAS is a study that tries to correlate MANY genes with single traits:

“The largest gwas for educational attainment to date found almost thirteen hundred si+tes on the genome that are correlated with success in school. Though each might have an infinitesimally small statistical relationship with the outcome, together they can be summed to produce a score that has predictive validity: those in the group with the highest scores were approximately five times more likely to graduate from college than those with the lowest scores—about as accurate a predictor as traditional social-science variables like parental income.”

We need to find a way to use a predictor that accurate to equalize results. IMHO: people with the (many) genes don’t need help. People without them need extra help. Or, as one expert noted, we need to de-emphasize the need for education in some cases.

How You Got To Be You 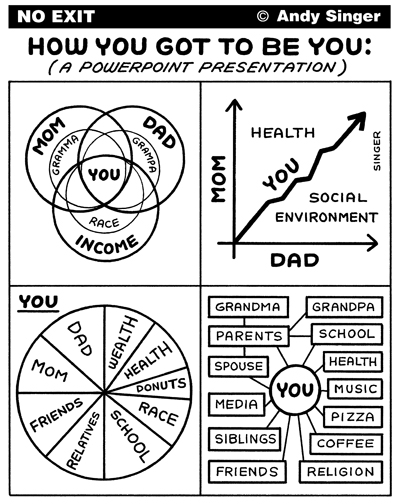